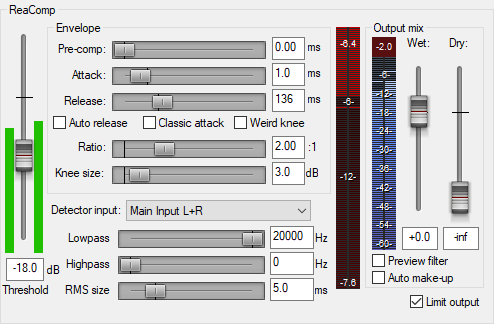 Sometimes you might need a compressor to use it as limiter, leveler, soft-clipper or to mimic other compressors’ sound. ReaComp will come handy in these cases as it has almost every parameter you can wish for when it comes to compression.

It is the built-in compressor that comes with Cockos Reaper, and it is included in the ReaPlugs VST FX Suite which is free.

By tweaking the knee and RMS size values you can change the behavior of ReaComp drastically so it might be a good starting point if you want to “emulate” the sound of other compressors.

By default, the RMS is set to 5ms, which could cause you problems, when a fast attack is your aim, so bring that value lower or set it to 0ms to make the compression react faster. If you use higher values here, the compression will react to the average level of the signal instead of the transient peaks.

To catch every peak or if you want the compression to behave more like an effect, instead of a mixing tool, try tweaking the pre-comp values. Be aware, that if you use this function live (using a MIDI instrument or recording sound), it will introduce latency, however by using it on material already recorded, it will use a lookahead up to 250ms and you won’t notice any latency.

If you just simply want to tame the peaks without tweaking too many parameters and worrying about the levels later, then go ahead and set the ratio and knee size to high values and voila, you’ve just made a soft clipper controlling the peaks without ever touching the threshold level.

You can adjust when to compress the signal at the Detector input section. If you have too much going on at the low or high frequencies, just apply some filtering to the incoming signal so that it won’t affect the behavior. SideChain compression is also an option here, just set the detector input to Auxilary input. It should also be mentioned here that you can use the output to make it a feedback compressor or choose to use only one channel as the detector input. These are rare functions amongst compressors. When you are unsure about the control signal, you can always take a listen how it sounds with setting the preview filter function on.

Those who would like to process the stereo signal separately for each side, would have to use 2 instances of ReaComp, as it will apply gain reduction with the same amount on each channel, even if one channel is significantly quieter than the other. In Reaper, this could be achieved in various ways, and you can learn more about that HERE.

You also have the ability to limit the output at 0dB to prevent blowing up your speakers.

To match the gain reduction, make-up gain could come in handy, although I always find make-up gains to be inaccurate at calculating how much gain to apply, so generally I leave them alone and set the levels manually.

ReaComp is one of the best compressor, not just because it’s free, but because of it’s Swiss army knife functions, great metering, low CPU usage, low latency and clean sound. I would not recommend it for beginners, because of it’s complexity, but if you know your way around in compression, you should definitely add it to your arsenal.